The work on speech coding involved development and implementation of candidate half-rate speech-codecs for the North American TDMA system and for the GSM system, see the publication 11 for details. In particular a time variable spectral analysis method was developed, for improvement of the AR-modeling part of the speech codec. The method embeds a stepwise time variability in the model, using the AR-parameters of the previous frame and the estimated AR-parameters of the present frame as end values. Thereby it is sufficient to transmit the estimated parameters of the present frame to the receiving end for re-generation of the speech signal. The model is illustrated in Figure 1. Table 1 displays the obtained improvements.

Audio quality problems caused by the codec used in the North American D-AMPS system was another field of reasearch. These problems were traced to an excessive non-stationarity of the AR-model part of the speech model employed by the VSELP speech codec.

In the echo control field, an Averaged Kalman Filter Algorithm (AKFA) was derived (1, 2). This algorithm provides optimal transient convergence of the adaptive FIR filter, as displayed in Figure 2. The computational complexity of the AKFA is the same as for the NLMS algorithm.

Statistical source separation algorithms exploiting dual microphones were also studied. The paper 9 presents a generalization of previous algorithms to the dynamic FIR filter case, and provides an initial analysis of the convergence properties of the generalized algorithm.

A new change detection scheme, based on an averaged low order model of the NLMS algorithm, was presented in 7. 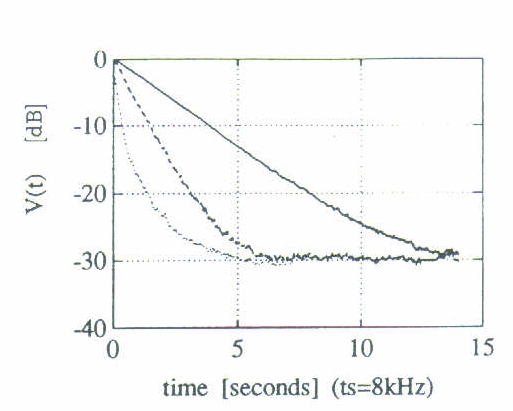