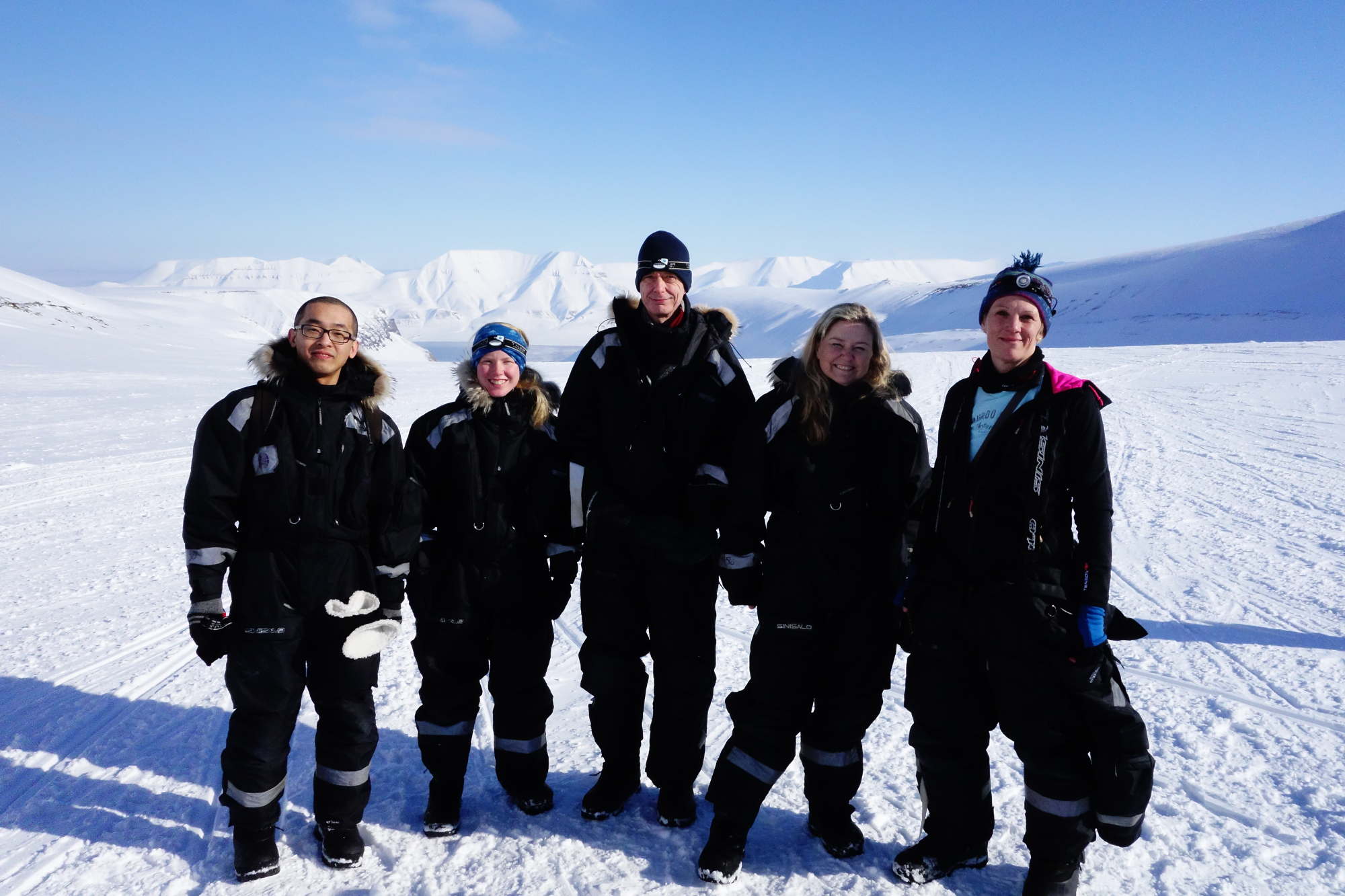 Ice group on a glacier in Svalbard in 2015

Ice sheets, with connected ice shelves, are important components of the global climate system. If all the ice on Greenland and Antarctica melts then the sea level will rise by 7 m and 70 m, respectively. Numerical models help us both in understanding past ice configurations, and in predicting future ones. Investigating past ice sheets typically require simulating long time spans such as 100 000 years. These type of simulations are called paleosimulations and are computationally demanding. The main goal of our research is to develop methods for paleosimulations of coupled ice sheet/ice stream/ice shelf systems.

Ice can be regarded as a fluid with a very high viscosity, and governing its dynamics are the Stokes equations. Stress and strain-rate are related by a non-linear constitutive relation, the so-called Glen's flow law. An ice sheet (the grounded part) deforms due to its own weight and flows out onto the sea, forming a so-called ice shelf. The equations governing the ice flow are computationally heavy to solve and in order to run paleosimulations, approximations are required. The by far most common approximation is the Shallow Ice Approximation (SIA). This project has received supports from eSSENCE

that solves the full Stokes equation with a finite element method.

The efficiency, stability and accuracy are the three major issues in the numerical simulation of paleo ice sheet modeling. We propose an adaptive time stepping method to efficiently solve the coupled system which contains the velocity field equations and surface evolution equation (or the thickness equation). It automatically determines the maximum possible time step and adjusts it throughout a simulation. The time step is changed in an efficient way such that the velocity field equation is only solved once per time step. The adaptive time stepping method is based on a predictor-corrector scheme. The time step varies to control the errors estimated by the difference between the predictor and corrector, which guarantees the stability and accuracy of the method for best computational efficiency.

The SIA is computationally cheap but models using the SIA typically fail in modeling ice streams (narrow bands of faster flowing ice) and the coupling between ice sheet and ice shelves, see left panel below. To remedy this we dynamically couple the exact equations with the SIA. The method is implemented in Elmer/ICE

and is tested by application to the SeaRISE-setup

and by various conceptual tests. It will also be applied to the Svalbard-Barents Sea ice-sheet.

in collaboration with the Elmer team at Finnish IT Center for Science Ltd., CSC

In this project we incorporate the SOSIA in an iterative method.

Accuracy and Validity of the SIA and SOSIA (Completed)

The SIA is based on scaling arguments and perturbation expansion. Based on the same theory, the Second Order Shallow Ice Approximation (SOSIA) can be derived. In this project we have investigated the limits of validity of both the SIA and the SOSIA.

In [2] we solved the exact equations using Elmer/Ice 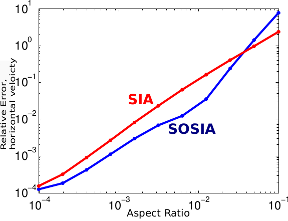 ARCTIC-TARAH is adjusted for the simulation of the Cordilleran Ice Sheet (CIS), which periodically appears in the northwestern corner over North America during glacial periods, and a 30 000 year long period is simulated [4].

Publications related to the project.

8th of February, 2012: Workshop in Ice Modeling and Simulation