The research on load estimation presented here was performed at Ericsson AB, during 2005-2011. All material on this page can be found in the publicly avilable publications 1-8.

In systems like the cellular WCDMA system, the uplink load of a cell is expressed in terms of the measured wideband interference divided by the thermal noise power floor. This quantity is denoted the rise over thermal (RoT). The RoT is of central importance when scheduling users in the enhaced uplink (EUL) of the WCDMA system. The reason is that the cell stability and coverage of the cell is closely related to the RoT. The scheduler must therefore schedule as much traffic as possible, while at the same time keeping the RoT below a threshold that secures stability and planned coverage. Please refer to 6-8 and the references therein for a more detailed description of WCDMA stability and coverage.

The papers 5-8 therefore address the problem of thermal noise power floor estimation, by application of non-linear techniques for minimum estimation. For reasons that become clear below, a Bayesian probabilistic (soft) approach is used.

The paper 8 describes the method applied in the field today, see figure 1. The received total wideband power is first processed to produce Gaussian power pdf:s. A Kalman filter is used for this purpose. The power pdf:s are then processed by the Bayesian minimum estimation algorithm of 7. This scheme estimates the minimum of the power as a conditional mean, conditioned on the power pdf:s in a sliding window, thereby providing an approximation of the thermal noise power floor. The RoT follows by a division of the received total wideband power with the estimated minimum power. An example of the operation of the algorithm appears in figure 2. 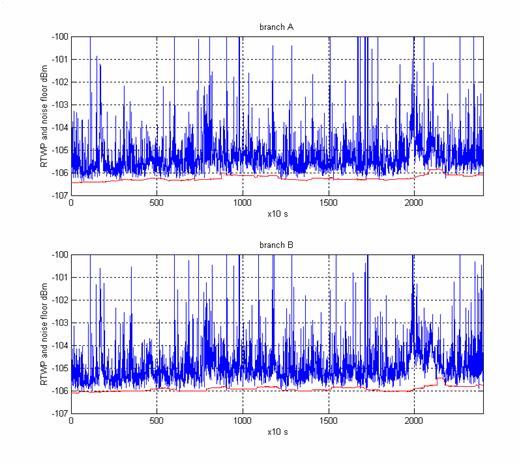 One of the advantages with the use of a Bayesian minimum estimation algorithm is that it allows a recursive formulation, see 6. There is hence no need to store power samples for processing, as would be the case if a non-probabilistic (hard) approach would be used. Furthermore, the Bayesian approach allows the uncertainty of the estimated RoT to be calculated as the conditional variance, see 6 and 7 for details.

When it comes to advanced receivers, like interference suppressing ones, the situation becomes more intricate. First, each user sees different interference powers, i.e. received wideband powers, after the IS gains have materialized in the receiver. Noting that the power control loops are closed at the SIR target reference, after IS processing, it is clear that it is the interference level after IS gains that matters for the stability of the uplink. Further, the coverage with IS receivers is improved since the interference level at the antenna can be increased without impairing IS receiver performance, below the performance of the RAKE receiver. The consequences of the above observed in 4 include

The paper 4 adresses these consequences by a derivation of new noise rise measures for stability and coverage, valid after IS processing for each user. These new noise rise measures are easy to compute at slot rate since they only require inner product evaluations. The computation require estimates of the symbol power, channel estimate, combining weights and the SINR. Techniques to combine the user individual noise rise measures into quantities valid for the whole cell are also described, see figure 3. Link simulation results (figure 4) show that the new algorithms perform as intended. 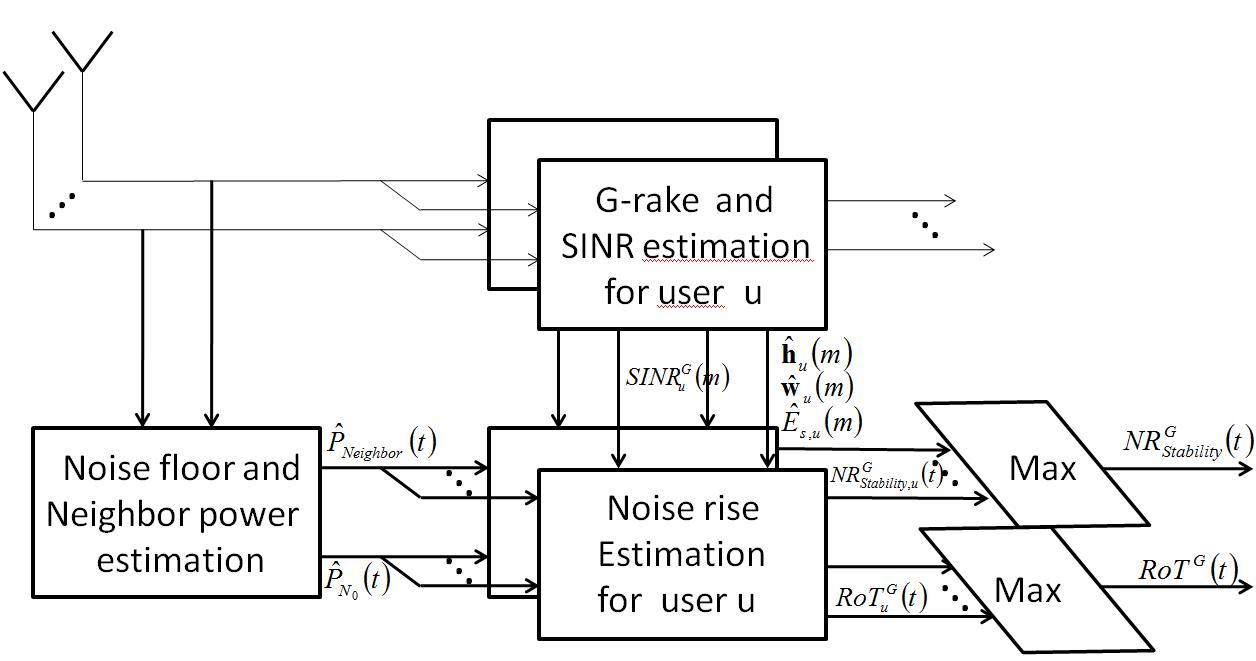 Figure 3: Block diagram of the load processing with a G-rake+ IS receiver. 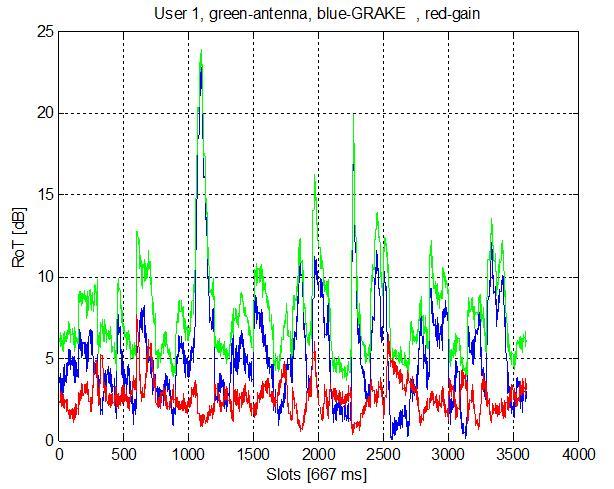 Figure 4: Time evolution of the RoT at the antenna receive port (green), together with the estimated RoT after G-rake processing (blue), for user 1 of the four users. The IS gain also appears in the plot (red).

Recently, rise over thermal estimation has also been considered for interference cancellation receivers. In that case it is the signal cleaned from interference in a buffer that is of interest to assess the load. The paper 3 discusses the details of this problem.