The research on cellular location technology presented here was performed at Ericsson AB, during 2001-2020. All material on this page can be found in the publicly avilable publications 1-18.

A main driver for the development of location technology has been the emergency positioning requirements for cellular phones, as required by the US federal communication commission (the FCC E-911 positioning requirements). Commercial applications have also emerged at a large scale with the frequent availability of GPS in cellular phones. This development can be expected to continue and accellerate when 5G wireless systems are introduced, building on 4G technology as described e.g. in 2, 8 and the papers 4-6.

At the focal point of cellular location technology stand the positioning methods. The backbone in all cellular positioning systems is the cell ID method, which reports a geographical description of the boundary of the cell to which a cell phone is connected. In the 3GPP standards, the polygon format that consists of 3-15 corners encoded as WGS 84 latitudes and longitudes, is commonly used for this purpose. The cell ID method is available wherever there is cellular coverage. It does not rely on any radio measurements and the response time is therefore very low. The problem is of course the accuracy which is limited by the size of the cell.

Due to the limited accuracy of the cell ID method, a variety of enhanced cell ID methods have emerged over the years. These methods all use additional radio measurements to narrow down the geographical region. Since radio signal strength measurements are subject to fading of various kinds, they are less suitable (but still used) for positioning. Time measurements are more accurate. One class of such enhanced cell ID methods measures the travel time of radio waves from the base station to the cell phone and back, thereby establishing a distance between the known base station position and the cell phone. In the WCDMA system these methods are denoted round trip time (RTT) methods, while GSM and LTE use timing advance (TA) measurements.

One such single leg RTT method tailored for the WCDMA system is described in 16 and evaluated in 13. The method avoids the complexity associated with measurements against different base stations. A reason for this is that such measurements require the cell phone to be in soft(er) handover with multiple base stations, something that only happens in small portions of the cell. The availability of multi-leg RTT positioning is therefore very low. Instead of performing multiple RTT measurements, the method of 16 combines the RTT distance by the cell polygon information, thereby determining a so called ellipsoid arc where the cell phone is located. The positioning procedure, which is depicted in figure 1, uses test points distributed around the base station at the measured RTT range. An algorithm then checks if the test point is located in the interior or the exterior of the polygon. A search determines the maximum set of neighboring test points that are exterior to the polygon. The complement of this set defines the left and right angles of the ellipsoid arc. This procedure secures that the left and right angles are correct also in case of multiple intersections between the ellipsoid arc and the cell polygon. The thickness of the arc is configured from the field trials reported in 13. A 90% radial accuracy of about 100 m is achieved by the method. This accuracy is expected to be much improved in 5G since the radio bandwidths are increasing a lot. 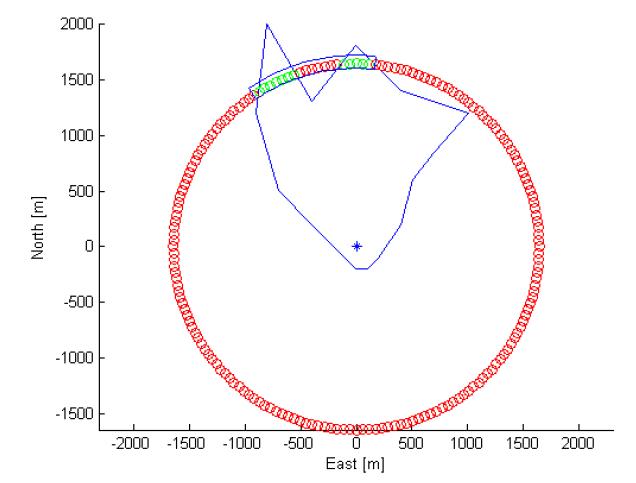 Figure 1: The position calculation principle of the WCDMA RTT positioning method of 16. The base station is marked with a blue star, the cell and the resulting ellipsoid arc are plotted blue solid, the test points appear green (interior) and red (exterior).

To circumvent and solve the above problems, the paper 17 replaces the surveying by the following self-learning procedure. Whenever high-precision position measurements (e.g. using GPS) are performed the cell phone is ordered to also perform radio measurements, like signal strengths with respect to neighboring base stations. Other information like the round trip time and the cell polygon is also collected from the cellular network nodes. After quantization these measurements form the fingerprint of the high precision position. In the next step such fingerprinted positions of opportunity are reported to a database where all high precision positions with the same fingerprint are collected in separate fingerprinted clusters. The server that stores the database then repeatedly calculates the boundary of each cluster, using the contracting polygon algorithm of 17 and 7. Refinements of clusters are treated in 9. The result is a fingerprinted polygon, compliant with the 3GPP polygon format. Furthermore, a byproduct of the algorithm is an experimental value of the confidence of each fingerprinted polygon. 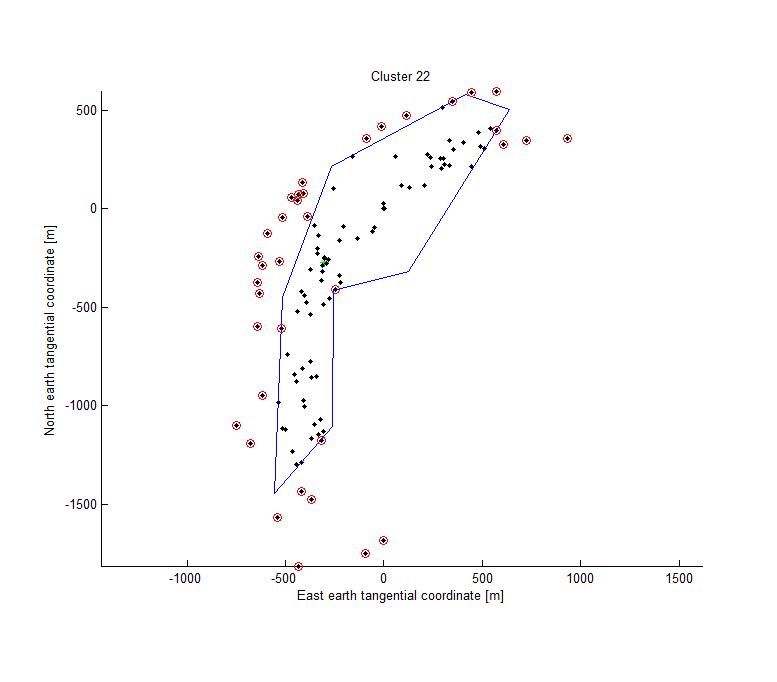 Figure 2: Illustration of the contracting polygon algorithm of 7 and 17.

When a cell phone is positioned with this adaptive enhanced cell ID (AECID) method, the fingerprint is determined, followed by a look up and reporting of the computed 3GPP polygon. In GSM the polygon needs to be transformed before reporting due to signalling constraints, see 11. The method solves the above problems. In particular the effects of user orientation is captured since live measurements are used for the database update. This means that the method provides realistic accuracies, with an experimentally determined confidence. The performance seen in field trials (14) shows that the AECID method outperforms non-adaptive methods using the same data at least by a factor of two. This is due to the use of measured data in the database buildup, which makes sure that the accuracy and flexibility of the polygon boundary is focused where there are many positioning events. Further enhancements of the method include addition of altitude information (3,5), useful for positioning in tall buildings. As of today (2017), AECID is in commercial operation in about 10 2G and 3G networks in North America, the Middle East, India, East Asia, Europe and South America.

Angle of arrival (AoA) positioning is another useful technology. It is commonplace in radar signal processing where it is known under the name of array signal processing. The need for dedicated antennas with several elements is however a main drawback in the cellular communication field. The paper 4 therefore studies an alternative lower precision method that does not require any hardware other than what is available in standard LTE base stations. The method exploits the directional properties of the different pre-coders that are used in downlink MIMO transmissions, see figure 3. Also AoA positioning is expected to become much more accurate in 5G wireless systems, with the introduction of large antenna arrays and advanced beamforming solutions. 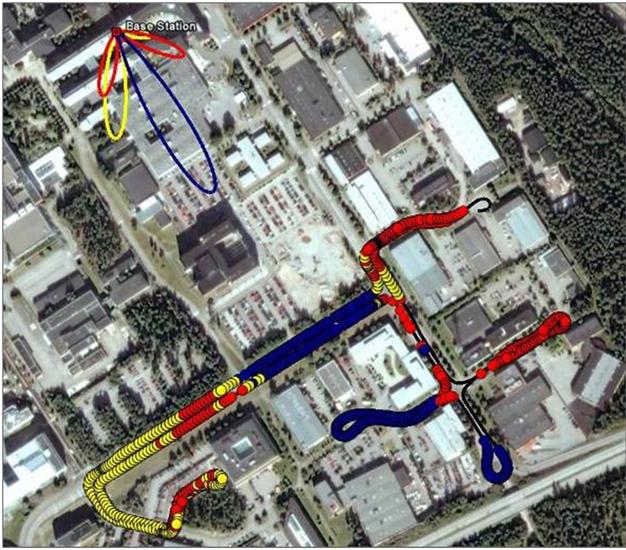 The most accurate positioning method available is assisted GPS (A-GPS). That method exploits reference receivers connected to the cellular network that continuously track the GPS satellites and decode the downloaded information. That information is then sent to the cell phones. The information allows the cell phones to skip several receiver steps, thereby increasing the sensitivity and reducing the time for the cell phone to establish a position, see 17 for some details on this. The cellular network adds to the assistance data by providing the cell phones with rough initial positions and time (8, 10, 18). The paper 15 studies the distribution of so called fine time assistance in detail. The idea is to exploit the polygon or ellipsoid arc geographical descriptions that result from an intial cell ID, RTT or AECID positioning. By accounting for the relative geometry between the initial region, the GPS satellites and the base station, tight boundaries on the time distribution error experienced in the cell phone can be established. These boundaries translate to a reduced code size search window, which is shown to enhance the A-GPS receiver sensitivity by 1-2 dB. An illustration of the algorithm appears in figure 4. The results of the paper builds on the following theorems on the GPS code phase shift between the time reference of the cellular network and the cell phone. The proofs exploit topological methods and appear in 15.

Theorem 2: The maximum code phase shift occurs at the boundary of the initial region. 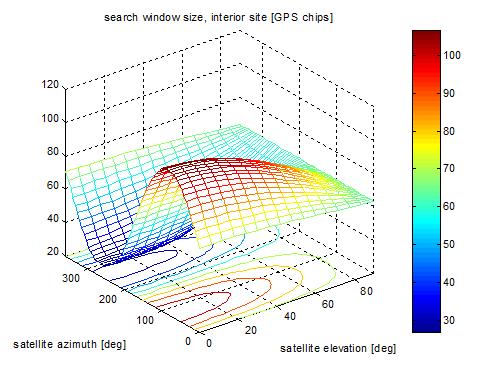 Figure 4: The size of the code search window as a function of azimuth and elevation of a satellite, when the intial region is the polygon of 13. 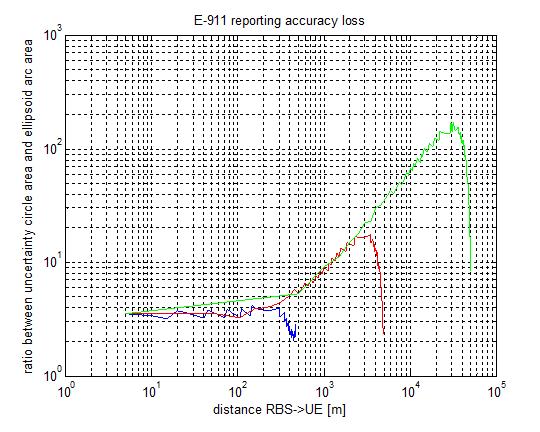 Recently, an increased convergence of cellular technology between different radio access networks has become a pronounced trend. This also affects the positioning solutions, as discussed in 6. 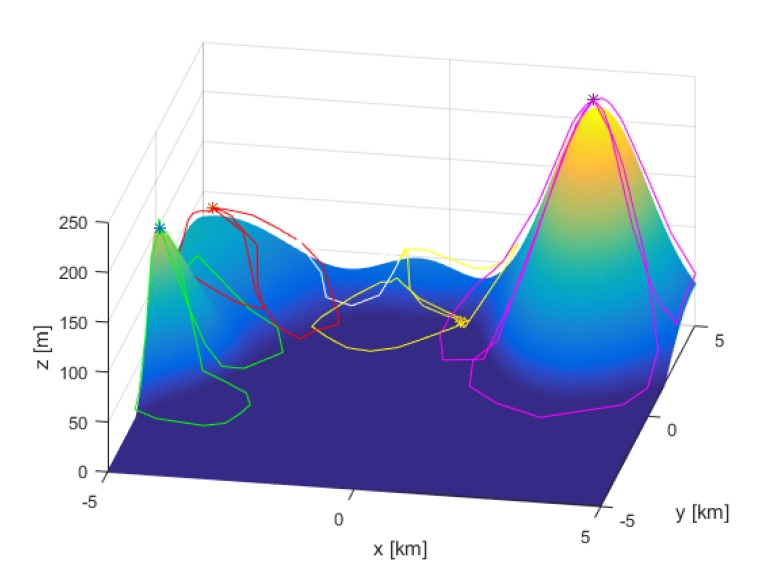 Figure 6: The reference topography . The cells are depicted with multicolored lines. 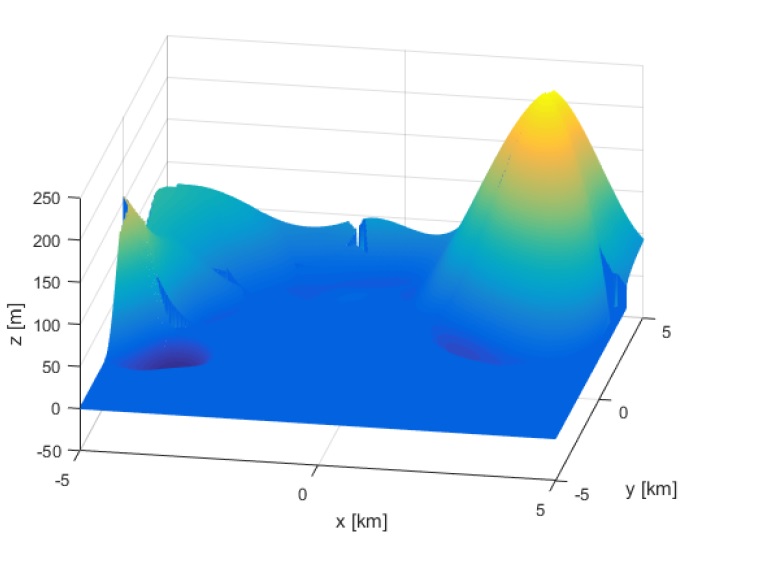 Figure 7: The estimated model of the topography . The cells are depicted with multicolored lines. A maximum of 15 parameters per cell is used for vertical modeling, yet 85 percent of the altitude variation is captured.

In 5G wireless systems 3D positioning will become increasingly important, due to the tightened E-911 requirements that now require a 3 m accuracy vertically. That could be addressed in small cells with a small amount of non-line-of-sight, by combining high accuracy RTT and AoA information. However, in large cells outdoors, e.g. in rural areas, this may not be enough. Dedicated 3D modeling techniques are therefore discussed in the paper 3. A hybrid 3D-TDOA technique with much improved vertical accuracy is also derived in that paper. Another problem that appears in TDOA positioning in mmW systems is that very narrow beams may need to be used to detect/be detected by distant neighbor sites. Since the position is not known, this may require extensive beam scanning, that may reduce the sensitivity of the reception and increase the positioning time. The paper 1 therefore discusses self-learning techniques that mitigate the problem. In some radio environments, like urban mmW environments, it turns out that geometrical constraints make only a small subset of the beam directions likely. This creates dependencies between beam directions of adjacent base stations. These dependencies can be learned on line and represented by histograms as depicted in figure 8. The histogram information can then be used for design of search methods that only need to scan a small amount of the beam directions. 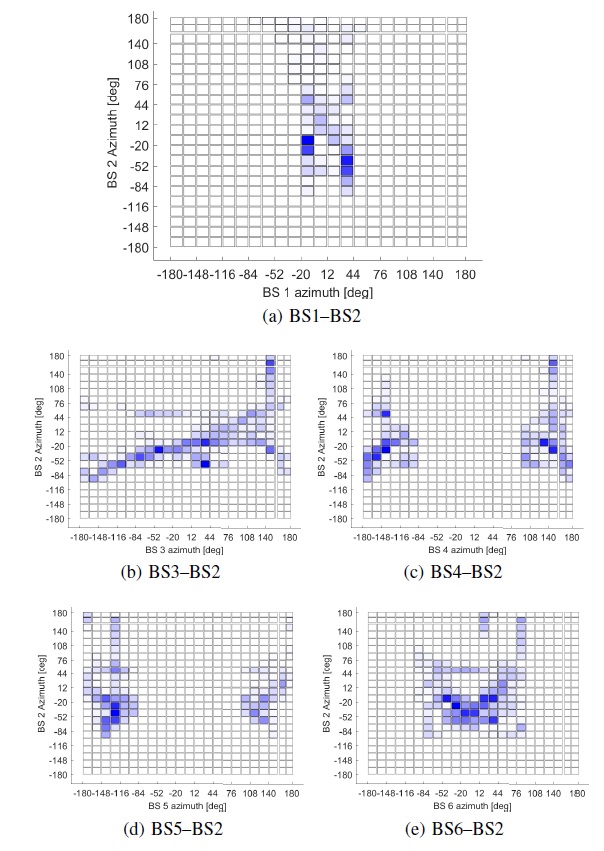 Figure 8: Multi-site beam direction histograms in azimuth, for the beam used for communication with base station 2 and adjacent base stations, when perfroming OTDOA positioning.