Networked control with saturation and delay

In the past, networked control systems (NCS) research has been quite focused on the effects of control signal quantization. With the emergence of critical machine type communication functionality (C-MTC) in the new 5G wireless systems that are under standardization, the need for networked control can be expected to increase. However, in that standardization the concentration on quantization is somewhat reduced to allow for a focus on low latency and reliability, thereby enabling new networked control applications in vehicles, for industrial robots, as well as haptic feedback control for gaming and perhaps even remote surgery. A main driver is here the cost savings associated with wiring of the control loops in place today. Furthermore, wired control may not be possible at all when new mobile networked control applications emerge. The scope of the present project is therefore on controller design methods that can meet the new requirements. Understanding these requirements is a key to arrive at design methods that will contribute to the widespread use of NCS in future applications.

First, wireless NCS will compete with existing technologies in existing industrial markets like industrial manufacturing, paper mills, vehicular technology and logistics, therefore the controller performance provided by a wireless NCS needs to be at least as good as what is available with wired technology. This is a challenge since it is hard to reduce delays associated with wireless interfaces without compromising reliability and capacity.

Second, in many situations the number of controllers that are run over the wireless interface will be very high. At the same time the available hardware may have to be shared with other wireless communication applications. Computational complexity and feedback signaling requirements therefore need to be considered in the controller design.

Fourth, the vast variety of applications means that the controller design methods should not be restricted only to feedback control, on the contrary feed-forward should be integrated with feedback control.

Design techniques to achieve low complexity and robustly stable networked controllers, tunable to the required performance are therefore studied here. Delay handling and delay compensation are then key aspects. In order to be able to deal with networked servo control problems, a saturation is also included in the dynamic model underpinning the design. As a side effect of this, the data flow control problem inherent in the wireless system can be treated within the framework. This is because the data flow is one-directional.

The block diagram of Fig. 1 appears in the paper 5 and covers all key aspects of the treated NCS. As can be seen two nodes are involved where the controller node hosts a controller that controls a plant in another plant node, over an interface. This interface may be a wireless interface in case applications are controlled using wireless access. The interface can also be an internet type interface of the wireless system itself. This is the case e.g. for the data flow control functionality in many wireless systems, see the paper 3.

Figure 1. The block diagram of the networked data flow control system of 5.

The controller combines feedback and feed-forward from a measureable disturbance, with a feedback part with three degrees of freedom. As can be seen the controller is linear except for the static nonlinear saturation. The static nonlinearity may for example represent effects of the actuator. The interface introduces delay in the downlink, delaying the effect of the control signal in the plant. The interface also delays feedback and feed forward signals from the plant. The plant residing in the plant node is modeled by three dynamic blocks. One block describes the dynamic transformation of the measurable disturbance before it enters the plant between the two other dynamic blocks. The plant is also affected by an additive measurement disturbance.

The dynamics of the NCS model is given in terms of transfer functions in Fig. 1. This is no restriction since a state space realization can be written down from the transfer function. This is the main approach here.

The first design appeared in the paper 3, and it is based on low order lead-lag feedback control and predictive feed-forward control and the objective is to control the data volume/dwell time of data packets in the transmit queue of the base station in the third generation WCDMA system. The saturation secures that the commanded data rate remains non-negative. The method has a very low complexity with only 8 multiply and add operations per iteration. It performs as required, however the Bode plot of the closed loop system (with the saturation neglected) in Fig. 2, reveals several resonance peaks originating from the infinite number of poles introduced by the loop delay. One reason for this is that there is no delay compensation in the controller, a technique that requires additional degrees of freedom. 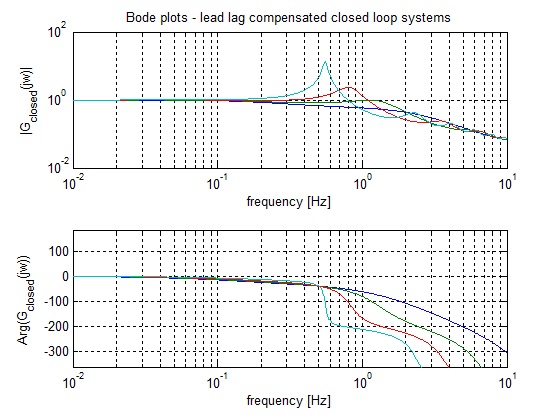 Figure 2. Bode plots of the closed loop transfer function for the system of 3, for varying selections of the interface delays. The resonance gets worse for increasing delays.

To improve performance and to obtain controllers handling general dynamics, the attention was turned to state space control. Joint NCS state space models were therefore defined, including modeling of measureable and un-measurable disturbances, disturbance measurement dynamics, uplink and downlink interface delay dynamics, and general plant dynamics. Based on these models, LQG and H2 controller design were performed in the papers 4 and 1, respectively. Since the dynamics of the measurable disturbances were included in the joint models, combined and co-optimized feedback and feed-forward controllers result. The block diagram of the NCS using LQG appears in Fig. 3, while the H2-case is depicted in Fig. 4. It can be noted that the LQG design handles any number of feed-forward channels, while the H2 design technique is so far restricted to one feed-forward channel. The H2 design technique is based on a new low frequency sensitivity constraint, derived in the paper 2. 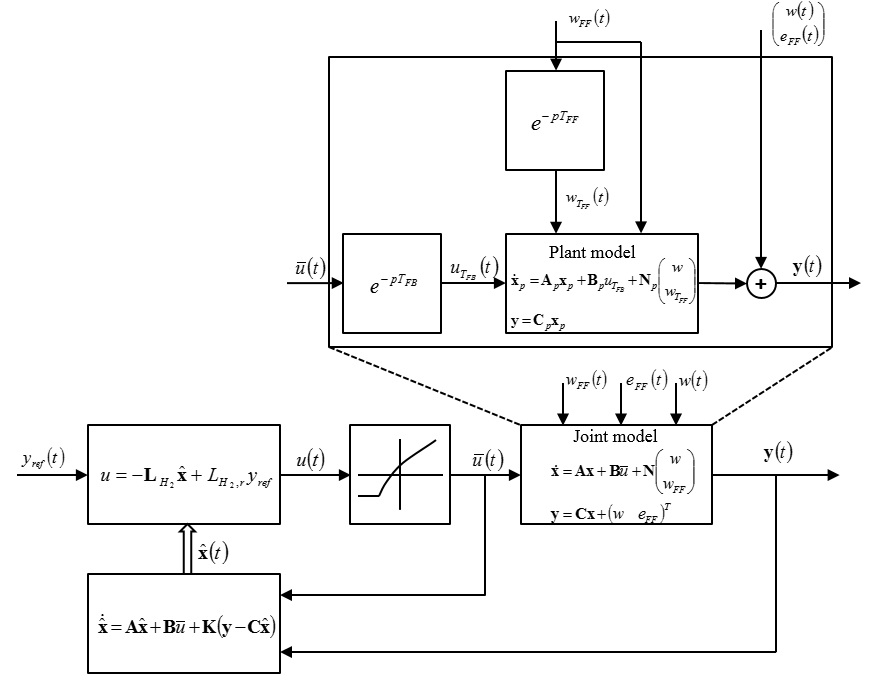 As can be seen in the Bode plot of Fig. 5, valid for H2 control, the closed loop transfer function is now much smoother, without significant resonances. This is an effect of a significantly higher model and controller order, with many degrees of freedom added by the embedded delay compensation. Another reason is the stability robustness with respect to the delays of the system that is introduced by the pre-computation technique described next. 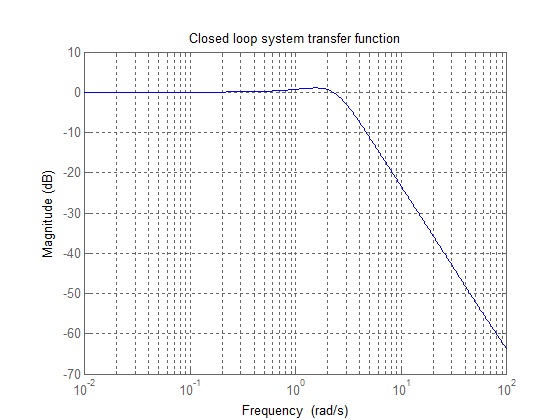 Figure 5. Bode plot of the closed loop transfer function for the H2 based NCS. The plant dynamics and the delay is the same as in Fig. 1.

Pre-computation of the stability region

The requirement on complexity is met by the above methods since they are based on linear unconstrained control. Also the performance requirement seems to be addressed by the more advanced state space controllers that include delay compensation and a jointly optimized state feedback and feed-forward gain matrix. The control signal is computed by multiplication of the gain matrix from the state estimates that are also based on delay compensation dynamics and optimal filtering of all measurable quantities.

However, due to the static nonlinear saturation, the stability of the LQG and H2 design method is not guaranteed.

Noting that the NCS consists of finite dimensional linear dynamics, infinite dimensional delay and a saturation, it is clear that stability can be addressed by the input-output version of the Popov criterion. The main additional idea is to utilize this to pre-compute (off-line) the subset of the L_2 stability region that is predicted by the Popov criterion. The pre-computation is done as a function of key design variables of the LQG and H2 design methods, while the stability region is typically characterized by the maximum allowable loop delay of the actual system. Given a graphical characterization it then becomes possible to select a point in the L_2 stability region that has a certain distance to the stability boundary, thereby obtaining a robustly stable controller. It can be noted that neither LQG control or H2 control are known to be robust methods, yet robust stability is obtained here. See 1-4 for detailed pre-computations algorithm descriptions.

The pre-computation uses gridding to evaluate the Popov inequality repeatedly, where the computation of each grid point requires a controller design step. This may seem computationally intense, however, normally only a few design parameters are used. A typical run time for the example displayed below is of the order of an hour on a top of the line laptop.

Remark: The Popov inequality is illustrated in Fig. 7. The closed loop system is L_2 stable if the Popov curve is to the right of any line with positive slope that passes the point -1 on the negative real axis. The Popov curve is similar to a Nyquist curve, but with the imaginary part of the loop gain multiplied with the angular frequency. See 1-5 for more details. 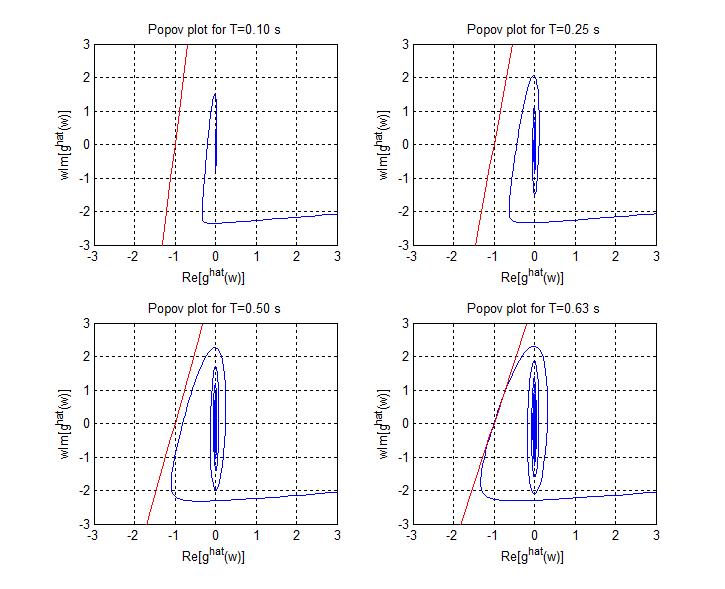 Figure 7. Popov plots for varying system delays for the LQG based NCS.

A typical result is depicted in Fig. 6. As can be seen from the results, Fig. 6 and Fig. 7 are consistent. The methodology for the H2 NCS is similar to the LQG NCS, see 1 for further details.