This research has been performed for Ericsson AB, in cooperation with the University of Newcaste, NSW, Australia.

Load based scheduling in WCDMA

Mobile broadband is today mainly provided by the 3G WCDMA cellular system. There scheduling in the downlink and the uplink are key technologies. In the uplink the scheduling needs to maximize the throughput, while maintaining a low enough load. The load is given by the total interference in the uplink, as compared to the thermal noise level. This load quantity is denoted the rise over thermal (RoT). Optimal uplink scheduling then operates by the celebrated waterfilling principle, whereby the available headroom is filled up to a specified maximum RoT. Despite the fact that load is the quantity that needs to be controlled by the scheduling algorithm, available algorithms take indirect or sub-optimal approaches, scheduling powers or applying suboptimal schemes like round-robin and proportional-fair. One reason for this is that the constrained scheduling problem can become non-convex with RoT as the target.

The paper 3 takes a new look on the problem and expresses the scheduling problem in terms of load factors that relate to interference in a one-to-one way. This means that the terms of the optimized sum of user throughputs is expressed in terms of load factors instead. Unfortunately, the functional relations between user throughput and load factors make the problem non-convex. The non-convexity problem is however solved in the paper by applying a quadratic approximation of these functional relations, the approximation being remarkably accurate as shown in figure 1. A convex scheduling problem can then be stated. 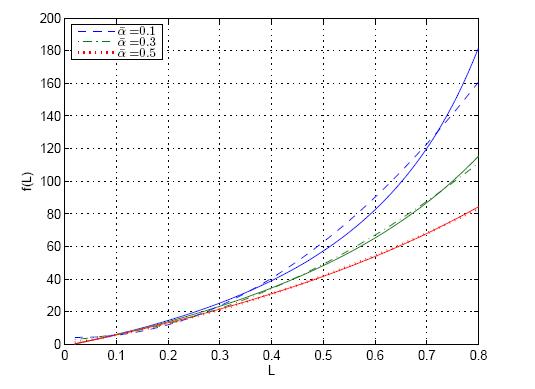 The resulting scheduling problem is solved in 3. The resulting near optimal algorithm is of greedy type. It is proved that the algorithm provides a solution which is within a small computable difference from the optimal solution. The performance of the near optimal scheme is depicted in figure 2. 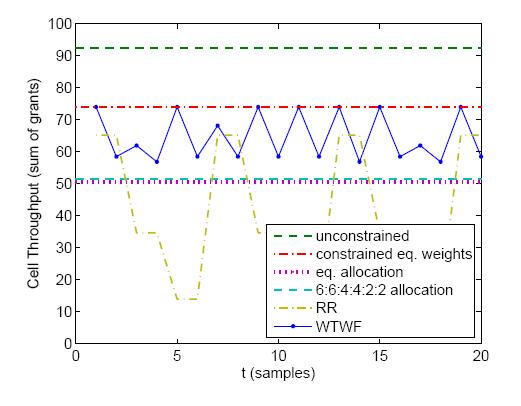 The paper 2 treats another problem inherent in the WCDMA standard. The problem is due to the fact that the UE grant may or may not be utilized. This means that the effect of the control command issued by the scheduler becomes random. The result is ont seldom under-utilization of the uplink since the scheduled interference becomes larger than the actual one. To overcome this effect the paper 2 presents new algorithms for statistical power over-booking.

Power control is a central function in the WCDMA cellular system. The inner loop operates at 1500 Hz and aims at keeping the signal to interference ratio (SIR) at a reference value, set by the outer power control loop to maintain a specific quality of service, see figure 3. The present research focuses on two aspects, these being the 1 bit quantization and the nonlinear coupling between the inner loops of the users of the WCDMA uplink.

The paper 5 introduces a network control system perspective and designs an encoder/decoder pair to compensate for the coarse quantization effect, while the paper 7 generalizes the controller structure with a 3-degree of freedom controller. However, further analysis reveals that two main impairments related to the quantization scheme remain, namely a limited slew rate and idling oscillation. The paper 4 addresses both these problems simultaneously, by the introduction of an adaptive decoder that varies the quantization step in the mobile receiver. Whenever two consecutive power control commands are the same, the quantization is increased a factor m. When the consecutive power control commands are different, the quantization is decresed a factor 1/m. To enhance performance further, the model predictive controller (MPC) in the base station is designed to optimize the commands, given knowledge of the operation of the decoder in the mobile, as illustrated in figure 4. An example of the result is depicted in figure 5. It can be noted that the slew rate is improved and that the idling oscillation (the limit cycle) amplitude is reduced. 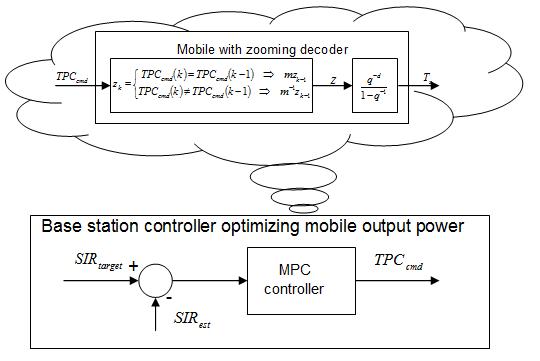 Figure 4: The MPC controller in the base station. 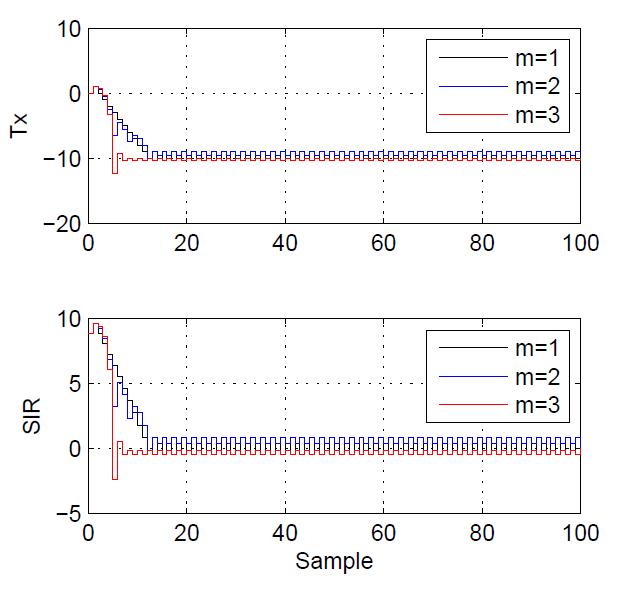 The nonlinear coupling is due to the quotient that appears in the SIR computation, where the powers of all mobiles of the uplink contribute. To address this problem global and local decoupling schemes are discussed in the paper 6. To summarize, the results indicate that decoupling is related to the use of constant received power control, rather than SIR control.

In 4G and 5G wireless systems the fast inner loop power control of the 3G WCDMA system is replaced by link adaptation. Then it is the task of the outer loop to adjust imperfections in the channel state information reports from the mobiles, amnifested as SINR errors in the link adaptation.

In the paper 1, a new schele for outer loop link adaptation is proposed. The algorithm considers a controller that operates in three modes. The first mode aims to quickly compensate for large changes in the SINR inaccuracies. The second mode aims to compensate medium size
changes in the SINR inaccuracies, while the third mode makes no change in the outer loop adjustments for small SINR inaccuracies. A major aspects of the proposed solution is the use of Sequential Hypothesis Testing (SHT) to keep the BLER within a desired range.