Solar power is becoming increasingly important due to the increasing problems with greenhouse gases in the atmosphere. Solar energy can be collected in many different ways including

The present project is focused on identification and control of a solar collector plant that heats water, to be used for cooling or heating of buildings. A special purpose is to identify non-linear models of the plant, to use the so obtained models for control and to evaluate gains. The project is performed within the EC HYCON project, contract number FP6 - IST - 511368.

The solar air conditioning plant is located in Seville, Spain, and is used to acclimate the Laboratories of the System Engineering and Automation Department of the University of Seville. The plant can operate for cooling in the summer and heating in winter. It consists of a solar field that produces hot water which feeds an absorption machine that generates chilled water and injects it into the air conditioning system, achieving a cooling power of 35 kW, in the refrigeration case. In the heating case the hot water is fed directly to the air distribution system.

New delay compensation schemes have been developed for the above reasons. After compensation the signals can be successfully run through the identification algorithms of the parallel project. One result is displayed in Figure 1. As can be seen the identified non-linear model is far more accurate than the linear one. The mean square error of the non-linear model is a factor of 10 (!) less than the mean square error of the best linear model found. 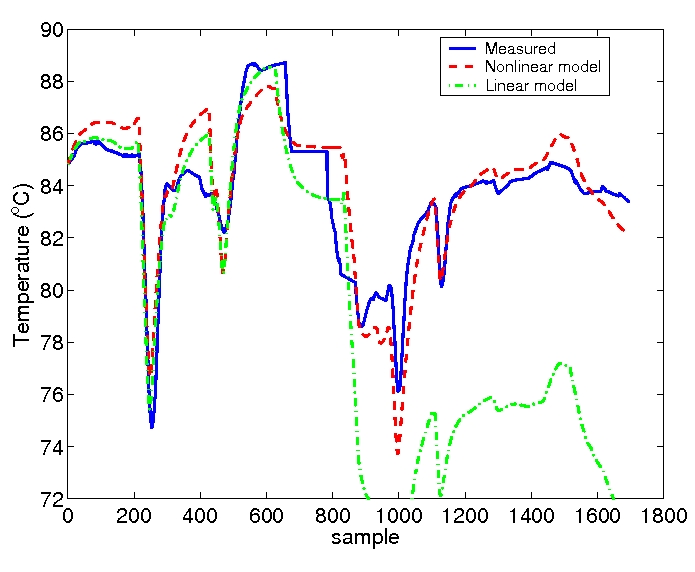 Figure 1: Validation of a non-linear (dashed), and a linear (dash-dotted) model of the output temperature from the solar collectors. The solid line is the measured output.

The accuracy of the non-linear model is particularly important when feedforward control is to be used. The objective in the project has been to develop a controller for control of the outlet temperature, using the solar radiation and input temperature for feedforward. Flow dependent sampling is used to compensate for the input signal dependence of the time delays. This embeds the controller in an environment where the time delays are approximately constant. A nonlinear optimal feedforward controller was then developed based on the model obtained from identification. The optimal controller penalizes the control error and the derivative of the input signal. This avoids offset and secures accurate control over the widest possible range. The feedforward controller is applied in an MPC re-computational setting. As reported in the paper 1 and the thesis 2, simulations with measured disturbances show that the controller performs well also during partly cloudy weather, this being a particularly difficult scenario. This is displayed in Figure 2, which shows a comparison between the performance of the controller (solid) and cases where constant control is applied. Note that the controller does not include any feedback or constraint handling. The reason is a desire to highlight achievable feedforward gains.

Figure 2: Feedforward control performance, using measured disturbances and the identified model. Controller performance (solid) is displayed together with constant control cases (dashed). The reader is refered to the paper 1 and the thesis 2 for more results and a more detailed description of the control problem.

The work with the controller has lead to two additional findings of general interest in MPC based feedforward control.