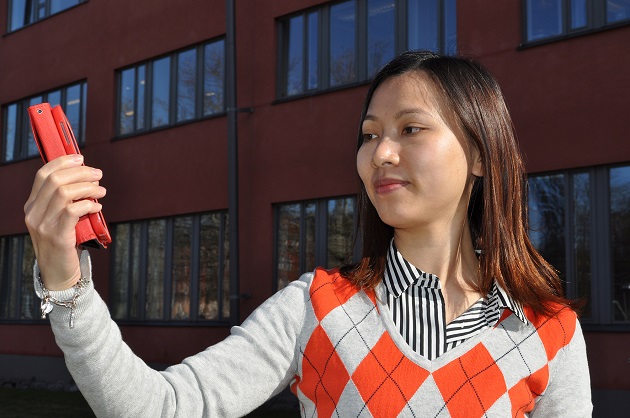 More and more devices are developed into sensors interacting with products, environments and services, not least humans. Time has come for information technology to more closely fit people's needs on both an individual and societal level, says Edith Ngai, researcher in computer systems at the Department of Information Technology.

Sensing the next green thing

- The key thing is that this data could be processed and aggregated in a cloud with greater storage and computation power. Then we can generate new knowledge and insights that we've never had before. Maybe we'll improve the world in a way we never could before.

In 2014, her research group received funding from Vinnova for the project Green Internet of Things, involving Uppsala kommun, KTH, Ericsson, IBM and four other business partners. The aim is to provide Uppsala with a wireless sensing infrastructure to collect environmental data for sustainable urban and transportation planning. This network will help monitor energy consumption and relieve traffic congestion, says Edith Ngai.

- The idea came one year earlier when we ran a project with some Chinese universities on the pollution problems in Beijing where the situation is of course much worse. Uppsala's bad air stems to a great extent from the studded tires we use during winter, scratching and scraping the asphalt so that particles from the road surface. Since these particle matters can cause health problems, they are some of the most critical measurements for our sensor technologies.

Paving the way for the future smart city requires multi-disciplinary collaboration, including specialists in areas such as air pollution, traffic and city planning, and policy making. Pushing the scientific boundaries also forms the core of another project on e-health, involving researchers in psychology, psychiatry, and biology.

- I'm interested in what can be done to improve people's quality of life and satisfy different needs, be it those of babies, the young or the old. That's how information technology should be used.

That lies behind her developing the mobile application SADHealth, a tool for monitoring effects of light exposure on activity levels, health and mood. The main goal of the project is to provide users with an application that can identify and help them understand the symptoms of Seasonal Affective Disorder, SAD, says Edith Ngai. She came up with the idea during her first winter in Sweden.

- Since my hometown Hong Kong is closer to the equator, the change between summer and winter is not as apparent as here. But when I moved to Sweden in 2008, I noticed how long the sky was bright during summertime, but the total opposite during winter. In the darker season, I needed more sleep and had less appetite. Also, when I went to Hong Kong for Christmas, my skin looked much paler compared to other Asians. This made me reflect on how seasonal change may affect people.

The mobile application is yet to be used for medical purposes but as a tool to measure how much light and exercise the wearer receives. Today's smart phones are equipped with all the sensors needed for the SADHealth app: camera, thermometer, light and proximity sensor, GPS. Several of Edth Ngai's master students are developing the app for their degree projects.

- We're improving the app continuously and planning on gamifying it so that friends can compete for how much exercise or amount of sunshine they get in the summer. In that way, people could encourage each other to spend more time moving and getting sun.

She also teaches courses related to computer networks, ´´´"basically all about computers talking to each other´´´". One is a 30 credit course, Project CS, where students work in close collaboration with industry, currently with Ericsson Research. Since February, Edith Ngai is also getting hands-on experience, as a visiting professor at Ericsson.

- My task is on how to secure data, which is a problem many say is getting more and more important. If you want to transmit data efficiently, then you must get used to a lot of routers cooperating in the middle of the network. But the question is how to protect security while taking advantage of this efficient and wide-spread distribution of data??

So where should such security measurements be implemented?

- Probably in different parts. We're investigating this problem, looking at whether the end-user can have control of how the data could be decrypted or accessed.
- Collecting a lot of data means a potential risk of exposing personal information. If we can't protect privacy while collecting data, people will be too scared to use for example health applications. This is a balance we must achieve.

Title: Docent and Senior Lecturer in the Division of Computer Systems at the Department of Information Technology, Uppsala University

First computer: "I was maybe 5 or 6 years old, and got it from my uncle, an electronic engineer and computer scientist. But I didn't understand much of how it worked so I didn't use it that much. And the programming class my mum put me in when I was 6 or 7 was too difficult to follow. But after three years in primary school I got into another computer class, and then it was easy."

Women and computer science: "There are still much fewer women in this field than men. Right now we're doing a lot to encourage females to study and pursue a career in IT. On September 24-26, we're hosting the Women Encourage Conference by the Association for Computing Machinery, ACM, which is the biggest computer science conference for women in Europe. "You don't want all the technical devices to be developed by men because they may not know what women need and want."

About Uppsala: "I fell in love with Uppsala when I came here for my job interview one day in May. The weather was so beautiful and the people super-friendly. I live with my husband, who's also from Hong Kong, in Årsta which is a very green and peaceful area. And I recently became a Swedish citizen!"