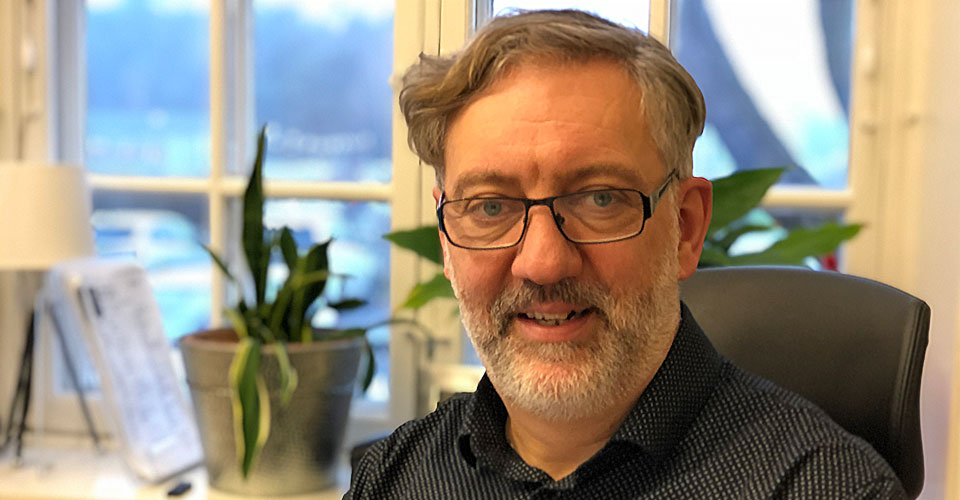 Anders Arweström Janssons research in human-computer interaction is about how to make people and technology work together. Photo: Kajsa Örjavik

”Human role in the technical systems is underestimated”

In order for computer technology to achieve its full potential as part of the social development, we need to understand how people use and interact with technology. How it works in reality. Anders Arweström Jansson, Professor of Human-Computer Interaction at the Department of Information Technology in Uppsala, says that the human role in technical systems is heavily underestimated.

Research in human-computer interaction is about how to make people and technology work together. Anders Arweström Jansson wants us to develop computer systems so that those who work with different types of traffic or in the process industry have the right computer support when doing their jobs.
- My research is about the interaction between people and computer systems in working life. The research includes analysis, design and evaluation. What do people do and how can we support them with good design of computer systems. Afterwards we look at how it became and how it could get better.

Human-computer interaction is interdisciplinary research. It is not just based on the technology which computer science would be, nor does it come from human beings, as psychology would, but it is based on the interaction between people and technology.
- It's extremely important that technology, computers and applications can be used so that different businesses can achieve their goals. I focus on usability in safety-critical systems. For example, in train traffic control, it may not go wrong.

- "The Human Factor" is a term that has been abused and which lacks scientific definition and is a bit of a Swedish fabrication. It means the ability of man to make mistakes, or vice versa, the inability of man to do things right, as an explanation of accidents and incidents. A more elaborate analysis shows that the causal relationships are far more complicated than that.

The train traffic management has the greatest focus right now, but Anders has also researched self-driving cars, cab design in locomotives and bridge design in high-speed ferries. He also works with intensive care and medical equipment.
- My interest in human decision making in complex systems already came when I studied psychology. I soon realized that I wanted to work with people in technical systems and came to Telia and KTH where I worked on Human Factors issues. I returned to Uppsala and the research when the Department of Information Technology was formed in 1999.

The interdisciplinary research of Anders lies in the border between Human Factors (which is a research area that focuses on how best to design workplaces, organization and the technology based on people's mental and physical conditions), human-computer interaction, psychology and cognitive science (which is an interdisciplinary research area where researchers from such different fields as philosophy, psychology, neuroscience, computer science, linguistics and social anthropology study the nature of human thought).

Results from Anders's research group include improved methods for cognitive work analysis. One method is collegial verbalization, where both the investigated person and his colleagues watch movies of how the person works and think out loud about the task that has been filmed.
- Some knowledge exists in the muscle memory only, and such "tacit knowledge" can be difficult to express, but when several people with the same tasks describe the same situation, we can compare the different perceptions and appreciations of people.
The results of the research are relevant to both psychology, computer science and cognitive science.

One challenge is to get technological development and knowledge about how people work to go hand in hand. In order to develop technical systems, one has to understand the role of human beings in the systems and the role of human beings is underestimated. If a person or business can not use a technology which has been developed, it is a waste of money.

Anders mentions the example of self-driving cars where reality will be different than people might expect.
- There will either be cars that run very slowly or cars that need someone to monitor the system for it to work. Or, we need to create an infrastructure similar to existing rail traffic, if the self-driving cars should be going in higher speeds.

As a teacher, Anders knows that it is incredibly important to spread knowledge to students who are next generation's clients and developers, and those who will create the future.
- Human-computer interaction is a demanded topic on many programs today, so it looks promising. Looking back twenty years, the development has been very positive.

Education: Dissertation in Psychology with a focus on decision making in 1997.

Leisure time activities: I’m often in the summerhouse in Torhamnslandet in Blekinge. Going to Sirius homegames in football. Genealogy and birdwatching when there is time.

Strength: If I have to say it myself, maybe my curiosity and my holistic view.

Weakness: My impatience, I often think things, big or small, take too long!