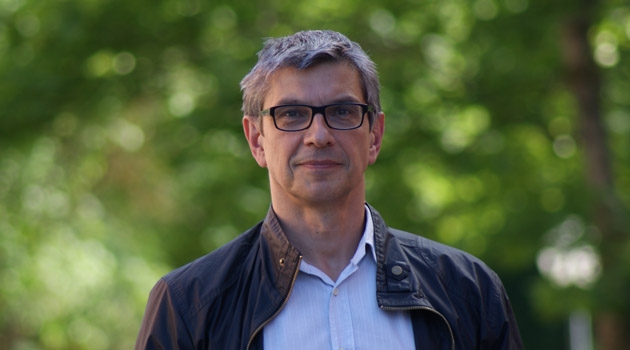 Alexander Medvedev is Professor of Automatic Control at the Department of Information Technology. Photo: Elin Eriksson

Is it possible to ensure that patients get the right dose of medicine? Or take their medications properly? Alexander Medvedev’s mathematical computer models replace uncertain assumptions with automatic decisions.

In health care there is an increasing need for modern and efficient treatment methods and techniques. There, computerised control systems fill an important role when it comes to planning, decision-making, implementation, and follow-up on treatment and medication. The basis for such programmed regulations is spelled automatic control, a research area where Alexander Medvedev is one of the model constructors. His focus is on the regulatory processes in living nature, such as the human body.

“Generally, I try to build mathematical equations to explain for example the hormone levels measured in the blood,” says Alexander Medvedev, Professor of Automatic Control at the Department of Information Technology. “I also use mathematical modeling to optimise and personalise treatments, including automatic dosage of the medications.”

“It had to do with women with premenstrual symptoms and the doctor was a gynecologist. I began to dig deeper into the problem and discovered that there was no coherent mathematical theory for how the brain regulates endocrine glands, which is what we have to address.”

Alexander Medvedev started a project on how to build mathematical models for endocrine system. He considers the team’s theory of how the brain controls the endocrine system by hormonal impulses his most significant research success so far.

“The success lies in the fact that we started from scratch and came up with something that is consistent with experimental data and biological facts. I’m about to write a book about this together with my Russian colleagues.

My collaboration with physicians at the University Hospital has continued, also involving automatic dosage of medication in general anesthesia or diseases such as Parkinson’s.”

Today, there are several ways to solve the problem with self dosage, using applications in mobile phones, tablets or laptops. Patients are then reminded of when to take the drug or how to adjust for missed doses. The software can also help to measure symptoms and compare with the patient’s journal history,” says Alexander Medvedev.

“It can be very difficult for patients to assess their medication on their own. According to doctors, patients then tend to overdose, which is also risky since increased dosage increases the complications of for example Parkinson’s.”

He admits constructing equations describing medical treatment is a challenge, both from a mathematical and an engineering point of view. An important part is to be able to measure the patient’s symptoms objectively, which requires computerised technical solutions.

One such technique is called eye-tracking, which is used in Parkinson care. It involves the patient observing and following a stimulus, a dot, on a tablet, while two built-in cameras are scanning the eye movements. By comparing the eye reactions to the moving dot, physicians can determine the level of severe neurological symptoms. These technical aids provide a safer basis for judgement according to Alexander Medvedev, including a higher level of efficiency which saves both time and money.
A tablet, a computer and a camera – that is all that
is needed to read and compare the patient’s eye
movements within the method eye-tracking.
Photographer: Elin Eriksson

“To determine which values can be neglected and which ones are important, I start with a mathematical analysis. Then I turn to the biological or medical data that exist, and compare what I see in the computer’s equations with the published biological data and the signals that physicians can measure. Then, I start thinking whether we can make any experiments. That is when it gets exciting because then we test a hypothesis, and for that we need collaborations with physicians or biologists. That’s the hardest part.”

His latest focus is deep brain stimulation, a technique that’s been used since the 1980’s for Parkinson’s but also for epilepsy, essential tremor and other neurological conditions. The treatment is carried out at the University Hospital and involves implants of electrodes in the brain, followed by stimulation with electrical signals. The patient is given a remote control to manage the signals and switch between different settings. The other and more advanced device is used by the physician to program the stimulation. What Alexander Medvedev and his research team have done is to develop mathematical models to calculate the optimal setting of electrical stimulation.

“We’re looking at MRI images showing what the patient’s brain looks like and where the electrodes have been implanted. Then we can figure out the spread of the electric field and what stimuli should look like to cover a specific area of the brain and not spill over. In this way, adjacent areas won’t be affected by the electric field’, says Alexander Medvedev.

“There can be multiple stimulation settings that produce similar results as our mathematical models. At that point, the physician can try these on the patient and measure the effects of the treatment on such symptoms as tremor and eye movement. One such study is currently underway at the University Hospital. As far as we know, it’s the first time this is done in Sweden.”

The team’s first study has shown that their mathematical models match reality pretty well and that the stimuli calculated by the models work on patients. On average, their models have resulted in a more than 40 per cent reduction of medications due to brain stimulation. It is particularly important in Parkinson’s because difficulties to provide correct doses increases with progression of the disease,” explains Alexander Medvedev.

“When it comes to motor skills, some patients will have almost no symptoms in conjunction with stimulation. However, there may be side effects if you stimulate the wrong area since different parts of the brain are responsible for different things. That is why it’s so important to figure out where the stimulation is located and that’s something physicians can’t do today. They can’t see into the brain, but the computer can.”

Background: Doctor of automatic control, Electrotechnical University in Leningrad, Soviet Union, 1987. One year of research at Åbo Akademi University in Finland, followed by a lectureship at Luleå University of Technology, 1991. Became professor at LTU 1998 and at Uppsala University in 2002.

Selected merits: Received a SEK 25 million research grant from the European Research Council in 2009 together with research leader Professor Peter Stoica at the Department of Information Technology. Alexander Medvedev is one of the founding members of the IEEE Technical Committee on Medical and Health Care Systems 2013.

About my choice of study: Three generations of my family all consist of physicians and professors of medicine. While growing up, I was constantly surrounded by this topic and it became too much, I wanted to pursue something else. In the 70’s, cybernetics was popular in the Soviet Union, people talked about the mysterious automatic system that would solve all problems. I became curious and wanted to work in this field. But later medicine has caught up with me. Now I’m often in hospitals discussing medicine with physicians and think it’s a lot of fun.

Do in my spare time: Workout in gyms

When I was little I wanted to be: Archaeologist