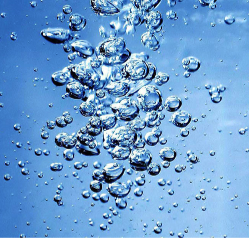 Using the finite element method to discretize the resulting system of partial differential equations allows for flexibility with respect to the geometry and adaptive mesh refinement. In order to accurately simulate realistic problems in 3D, millions or even billions of degrees of freedom can be required. In this case, efficient parallel implementations for large-scale computer systems are necessary.

In this project we are using and actively developing the open-source finite element C++ library deal.II

Problems involving two fluids that are in contact with a solid are called moving contact line problems (or contact point problems, in 2D). For these problems the standard model is not accurate: by the no-slip boundary condition, appropriate for Navier-Stokes equations describing the fluid velocities, the contact line cannot move. This is not true in reality (think of rain drops flowing down a window). Therefore, in simulations of moving contact line problems it is necessary to introduce slip at the boundary representing the solid. However, introducing slip in an accurate way is not straightforward. Common problems are inaccuracies in the model and grid effects. 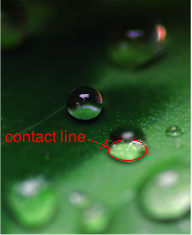 Parallel implementations for CPUs and GPUs

The majority of the computational work in a multiphase flow simulation consists of matrix-vector products inside an iterative linear solver. However, with its low computational intensity, the sparse matrix-vector product is very poorly suited for the architecture of modern multi-core processors, where data transfer is expensive and computations are cheap. This issue grows with the number of unknowns and becomes especially severe when high-order basis functions in 3D are used. 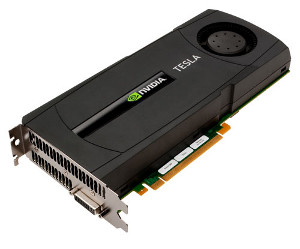 Matrix-free methods based on tensor products do not rely on an explicit matrix for performing the matrix-vector products, but merely knows the recipe for performing the product. This introduces additional computations, since the contribution of the matrix will have to be calculated upon each product, but greatly reduces the amount of data transfer, and is thus much better adapted to present and future hardware.

Nowadays microfluidics technology allows for successful control of the fluidic environment at the scale of cells. In this work we are dealing with a microfluidic chip that enables high-throughput separation of bacteria from human bloods cells. The flow in these chips is characterized by low Reynolds numbers, i.e., a laminar flow behavior, which is why single cell handling and analysis is possible. Our aim is to numerically demonstrate the ability of the device to sort not only differently sized particles but to also sort particles of different densities. Here we are faced with the motion of binary fluids that includes two phases of different composition. This dynamical system can be modeled by the two-phase flow equations. 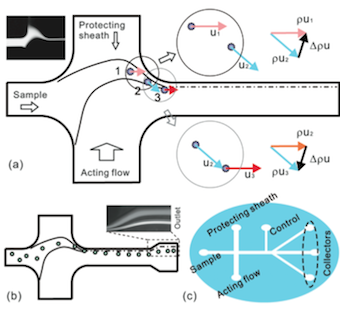 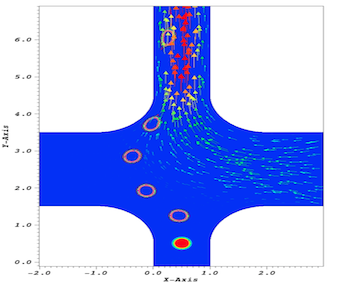