Waves appear in many different forms in nature, such as in acoustics, seismology, electromagnetism, oceanography, and general relativity. In this project, we develop accurate methods for wave propagation problems.

One of the main interests in this project is to improve the stability and accuracy for relativistic quantum mechanical calculations applied to problems relevant to materials science. Thus far, a strictly stable high-order accurate finite difference method for the Dirac equation has been constructed and implemented. We will now focus on applying the Dirac-solver to Klein-tunneling phenomena in graphene and the outer electron behaviour in heavy elements relevant to catalytic materials science. In particular, time-dependent phenomena such as Klein tunneling, Aharonov-Bohm effects, and local polarizations such as Berry phases will be investigated.

Distinct features of elastic wave propagation appear at boundaries and interfaces. Examples include the Rayleigh surface wave at a traction free surface and the Stoneley interface wave at an interface between two elastic materials in contact. Boundary phenomena are often involve sudden changes in present phase velocities and spatial frequencies. This project focuses on high order accurate discretizations of boundary and interface conditions for the elastic wave equation.

Because ordinary finite-difference methods become unwieldy in the presence of complicated geometry, recent efforts have been directed towards an immersed boundary technique. There, the grid points do not have to coincide with the boundary.

We investigate how to impose boundary and interface conditions with finite elements for problems when the mesh is not aligned with the domain. This would be referred to as immersed finite elements. Using an unfitted mesh typically leads to an ill-conditioned system when some elements have only a small part inside the computational domain. This can be remedied by additional penalty terms which are investigated in this project. Recent focus has been on weakly imposing boundary conditions using Nitsche's method together with appropriate penalty terms. So far the acoustic wave equation has been considered. 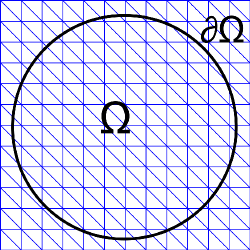 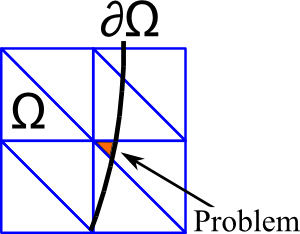